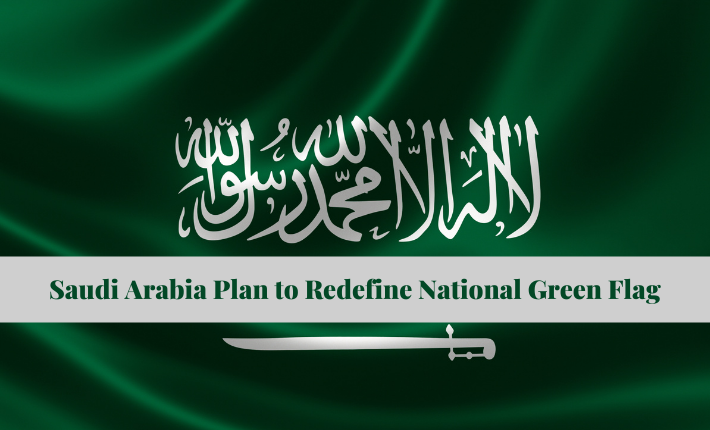 Kingdom of Saudi Arabia is moving toward changing its national anthem as well as its their green flag (National flag of Saudi Arabia). Currently, the flag is embossed with a sword and engraved with the Islamic creed (Kalima) (La ilaha illallah muhammadur rasulullah in arabic – لا إلها اللله محمدر رسوللله) as the country that gave birth to the religion.

On Monday, the kingdom’s Shoura Council voted in favor of changes, as per the media sources. The vote comes as the nation’s youngest prince crown prince Mohammed Bin Salman insists on Saudi nationality and pride in the country. The council’s decisions are not influenced by existing laws or structures, their council’s vote is significant as the council members are appointed by the king, and their decision-making is often coordinated with the leadership.

Other media linked to the state have reported that the changes are in favor of changing the rules that govern the flag and its slogan, as well as the national song, but not its content. The council hasn’t provided more information.

Local media also reported that the proposed changes will clarify the appropriate use of the state symbol, increase awareness of the significance of the anthem and the flag and to protect the flag from damage or abuse.

The week before, Saudi police arrested four Bangladeshi men for breaking the Saudi flag, which bears the Islamic creed. They were accused of throwing it in a garbage bin.

The state-owned Saudi Press Agency (SPA) reported only that the Shoura Council voted to approve the draft amendment to a 50 years old royal decree that governs the flag. The proposal came from Council member Saad al-Otaibi. It was then considered by a subcommittee prior to when the council discussed it with members.

The idea is amidst rapid changes that have transformed the extremely conservative nation. With the backing of his father who is octogenarian the King Salman and the his Crown Prince Mohammed bin Salman has been working hard for a new definition of Saudi identity, replacing pan-Islamism and a national culture that is not merely determined by religion.

For instance the royal decree was recently promulgated that declares the 22nd of February. 22 in Saudi Arabia as the Founding Day. This holiday is intended to celebrate the 18th century effort made by the Imam Muhammad bin Saud to found the first Saudi state before it was destroyed under the rule of the Ottomans. Additionally, this week, Saudi Arabia’s government has ordered coffee shops and restaurants within Saudi Arabia to rename “Arabic coffee” in the form of “Saudi coffee” in the latest attempt to increase awareness of an “cultural element that expresses the Saudi identity” and its culture according to state media.

Since 1973 since 1973, in 1973 the flag of the green Saudi flag has displayed the Islamic proclamation of faith written in white Arabic calligraphy which reads: “There is no god but Allah; Muhammad is the Messenger of Allah.” In those words, there is an arrow. The kingdom welcomes Muslim pilgrims from all over world, who visit the site of the birth of Islam in Mecca which is in which Muhammad, the prophet Muhammad was born. It was also where Muhammad received the first commands from the Quran.

Since there is no press that is free, state-owned media outlets offered information on the Shura Council’s proposed flag codes and national anthem. It will be sent to the King Salman for consideration. It is true that in Saudi Arabia, there is no independent local media, and repression has gotten more severe during the time of the crown prince as per organizations like Reporters Without Borders.

Its daily Ashraq Al-Awsat and Sabq news website reported that the idea due to the massive changes that the kingdom has experienced in the past few years. These include modifications to the current legislation to help support the objectives and plans that are part of Vision 2030 — the crown prince’s ambitious project to revamp and reform the Saudi economy and ensure it is more resilient to the fluctuation of price of oil and the need for energy efficiency. energy.Saudi Arabia is advancing towards changes to the national anthem and its the green flag, which is decorated with a sword, and is engraved with the creed of Islam as the place where Islam was born.