Now according to the Saudi laws, the expatriates will be halted at the airport and ports if they try to leave the Kingdom of Saudi Arabia without paying their traffic fines imposed on them.

The Colonel Engineer Ali Al Zahrani said that this law will be implied from 1st  of November 2019 , to all the vehicle whose number plates are of Gulf countries including Kuwait.

Those who have failed to pay their traffic fines and have any pending challans against their Iqama will be stopped at the border of the kingdom.

This rule will be implemented starting Nov 1 2019.

No Final Exit Visa If Traffic Fines are Pending in KSA

These standards will be monitored on all the outskirt ports and Air terminal .  Any person who did not clear even a single criminal offence fine will not be allowed to get the Final Exit Visa until and unless they clear up their due.

In the guidance of the Ministry of Interior , as per the given instructions, traffic violators whose fines are still not cleared up will be stopped at the Al Rigae, Khafji and Batha land ports commencing from the 1st of November.

This law is being implied so as to reduce the traffic violation cases. Also the “Visa and Iqama “ will not be issued to the to the expatriates if their sponsors also have not cleared their fines.

A final exit visa stamp will be not be put up  on the passport of the expatriate until and unless he has cleared all his traffic violation fines . 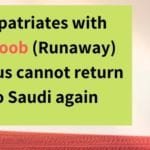