According to Al-Madina Arabic newspaper any expat who is 60 years of age or above will be counted as two expat staff in the Nitaqat Saudization program.

Apart from few professions like investors or academicians (professors, associate professors, assistant professors, lecturers) Doctors will not be considered as two staff even though they are above 60 years of age. Medical Technicians and Pharmacists will fall under Nitaqat Saudization program.

.Meanwhile the ministry has supported special needs people through its program “Tawafouq” and Nitaqat Plus.

The ministry has started to implement a wage protection system based on seven stages to ensure that employees get their salaries on time.

Over 7,000 establishments have been included in 2015 in the wage protection system with more to be included in the coming two stages.To make the Saudization effective no Saudis are included in Nitaqat if their monthly wages are below SR1,500.

The Ministry of Labour and Social Development has started a long-term plan to equip Saudis to dominate the job market over the period of 25 years which started in 2010.

The unemployment rate has dropped since the implementation of the strategy and in 2015 the number of unemployed Saudis was 647,000.

The plan also included making the private sector an attractive hub for Saudi jobseekers, this led to the increase of Saudis in the private sector who exceeded 1.7 million by 2015.The year 2015 also marked an increase in the number of employed Saudi women who increased by 21% compared to 2014. Among the domains that women increased their presence in are: Construction, training, social services, downstream industry, insurance, real estate and business, transportation, agriculture and fishing, mining, electricity, water, and gas 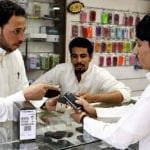