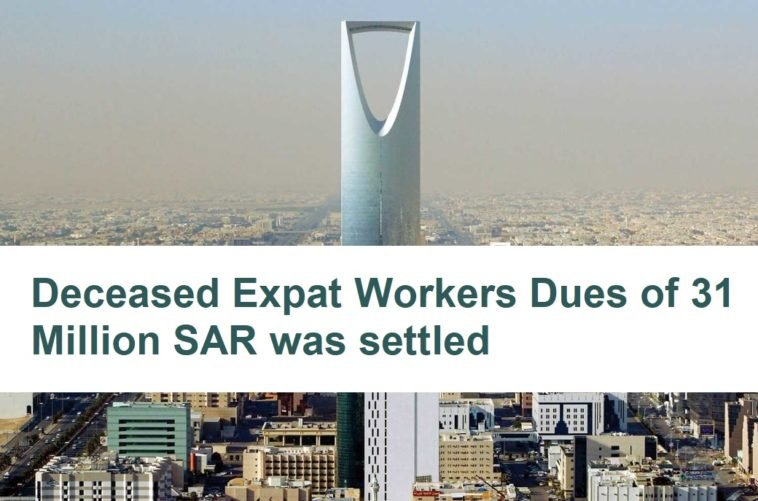 Many foreign workers come and work from different countries in Saudi Arabia. Expats workers often spend half of their lives working in the kingdom and some die here itself while their families live in their home country.

Saudi Department of Labor Relations at the branch of the Ministry of Human Resources & Social Development in the Riyadh has been able to settle claims for dues of deceased foreign & expatriate workers. Total of 31 Million SAR have been given till now to the family of the deceased expat workers in the last 15 months. This is a big amount for the kin of the deceased in co-ordination with the respective embassies and their relatives.

This is really very good from Saudi Arabian government which marks a major achievement in protecting the rights of workers and providing motivation to all the Expat workers who are living and working in Saudi Arabia leaving their families back in their home country.

The department is also involved in implementing the new Labor Law regulations announced by the Ministry as part of the labor reforms in Saudi Arabia which includes transferring services of workers without the consent of the employer in the event of the failure of the latter in attending the sessions for the amicable settlement of disputes; granting work permit for the purpose of issuance of final exit in the event of the expiry of residency permit (iqama); granting work permit with authorizing its fee to be paid by the employer who halted his business activity, in addition to receiving complaints about runaway workers and handling them.