Saudi Arabia have a population of 32 miliion people and contributes 0.5% towards world poplucation. In the year 2017, Expatriates (Foreign Workers) contributes to 10.5 million in Kingdom of Saudi Arabia (KSA).

Syrian & Indian contributes to top of Expatriate and Foreigner workers in KSA and almost 80 % of the foreign workers have less salary of 2500 SAR. Kingdom of Saudi Arabia (KSA) is ranked as 3rd largest population in term of Expatriates living in the country following Russia on 2nd place and USa at 1st place.

Saudi Arabia is the second largest country from which remittance are done. 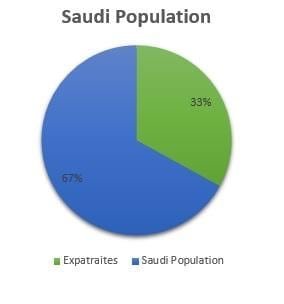 Estimated population of Saudi Arabia would reach 37.2 million by the 2020