Kuwait has resumed its air travel and Kuwait council of Ministers have decided to allow residents and citizens to travel between other countries to Kuwait and vice-versa starting August 1st 2020. Earlier this week, Kuwait announced that airlines operating out of Kuwait International Airport (KIA) would resume commercial flights to destinations in 20 countries from August 1st 2020

In a statement, Kuwait’s Directorate General of Civil Aviation had said that flights would begin operating from KIA to eight countries in the Middle East — the United Arab Emirates, Bahrain, Oman, Lebanon, Qatar, Jordan, Iran and Egypt; six in Europe — Bosnia-Herzegovina, the UK, Turkey, Switzerland, Germany and Azerbaijan; five in Asia-Pacific — Sri Lanka, Pakistan, Nepal, the Philippines and India; and to Ethiopia in Africa.

Last month, Kuwait announced it would partially resume commercial flights from August after a nearly five-month hiatus due to the outbreak of coronavirus pandemic, but does not expect to reach full capacity until a year later, as its aviation sector gradually recovers from a suspension sparked by the COVID-19 crisis. 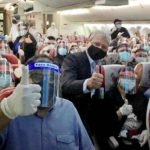