From a recent report publihed on Saudi Gazette showed the nu,ber of Jobless Expatriates in the kingdom have been increased when compared to second quarter and first quarter of 2017according to General Authority for Statistics (GaStat).

Among total unemployed in suadi Arabia, expatriates represent 10% jobless in which the ratio between men & women is 70:30

So, Expat Men are around 7% and Expat women are arounf 30% unemployed. Overall unemployment has also gone up from 775,994 in the first quarter of this year to 802,588 in the second quarter.

GaStat said the rise in the number of jobless expatriates coincided with the government’s plans to Saudize jobs in many sectors.

Though thi is not good new for ecpatriates living in Saudi Arabia. we ar emore concerned about what will happen in th future. But as you always know that Allah is the best planner.

So, I just want my expatriate brothers to learn something technical and suggest them to acquire jobs which are technical in nature to survie in the kingdom. 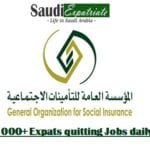