Ministry of Civil Service has terminated the contracts of around 2000 Expatriates who were working in Public sector companies and the signed only 890+ expat contracts.

The ministry said that 5,090 employees were issued transfer approval during the year. 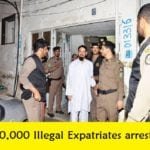