According to the news published in Daily Sabah, in a statement which is issued on Tuesday, Saudi Govt. banned visitors from taking photos and shooting videos at two holy places of Islam.

It may be noted that this ban applies to all including media persons. It is not limited to Great Mosque of Makkah and Masjid-e-Nabavi of Madina but also applies in the surrounding areas.

Saudi authorities said that the reason for this ban that it causes disturbance to worshippers at these mosques.

The statement further mentioned the penalty for violation of the ban. It said that devices used to take photos and shoot videos will be seized and legal action would be taken.

It may be mentioned that earlier, a photo of an Israeli man in Masjid-e-Nabavi had triggered uproar. 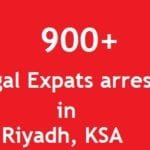