As per the recent statistics issued by the General Authority of Statistics during the 4th quarter of 2018 , there is a drop in 31,882 expat drivers in their overall number.

As per the decision taken by the Saudi Government, Saudi women are now able to drive which was not allowed before according to the Saudi laws, this has led to the decrease in the number of expat drivers of Saudi Arabia.  This law has deprived the already working Saudi expat drivers from their jobs.

The number of expatriate drivers working for Saudi families will be dropped further in the coming future because Saudi Arabia’s King Salman Bin Abdul Aziz Al Saudi lifted the ban on driving of women in Saudi Arabia last year in june.

According to the Ministry of Labor and Social development , recently 181 women expat drivers approached for driving in Saudi Arabia where as previously only 65% of the expat family drivers used to be from the Asian Countries. 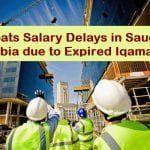