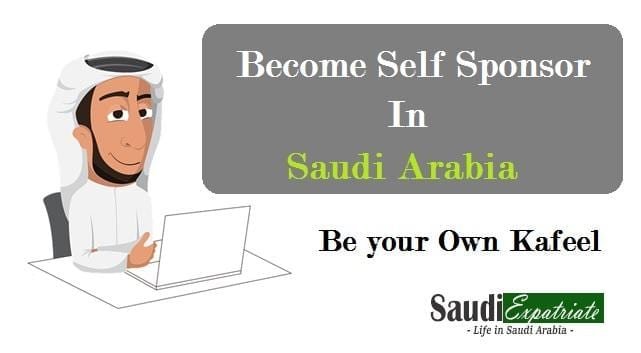 Are you hearing this correctly abour Self Sponsorship? Then, yes you’re at the right place to know on How to Become Self Sponsor and Be your Own Kafeel in the kingdom of Saudi Arabia.

Saudi Arabia is moving forward with great speed in improving its economy as well as better decisions in making the kingdom full of legal expats with Amnesty program.

With a proposal that Expatriates can Invest & Become Self Sponsors; Expatraites if they invest in Saudi Arabia and pay a tax of 20% annually then the Expatriates can Sponsor themselves and Become they Own Kafeel.

This new Proposal in Kingdom of Saudi Arabia is not yet approved is still under study.

There will be two types of Taxes:

1) Tax on regular Accounts in which Expatraites have to pay Tax on Revenue, Gains and Costs
2) Tax will be on profit. In Case there is not Profit, then expats have to pay certain % based on their profession.

Till now Expartriates have been doing businesses under the name of Saudi Citizens and giving a share in their profits. Now they can run their own business with their own names and become Self Sponsor by paying a tax on profit to the government.

80% off the Expatriates dominate Saudi commercial busness which is upto 300 Billions SAR and is covering most of the Saudi economy, which is the main reason behind the unemployment of Saudi Citizens.

Thats why Saudi Authorities want to allow Expats to invest in Saudi and Pay taxes to reform labor market in Kingdom of Saudi Arabia.